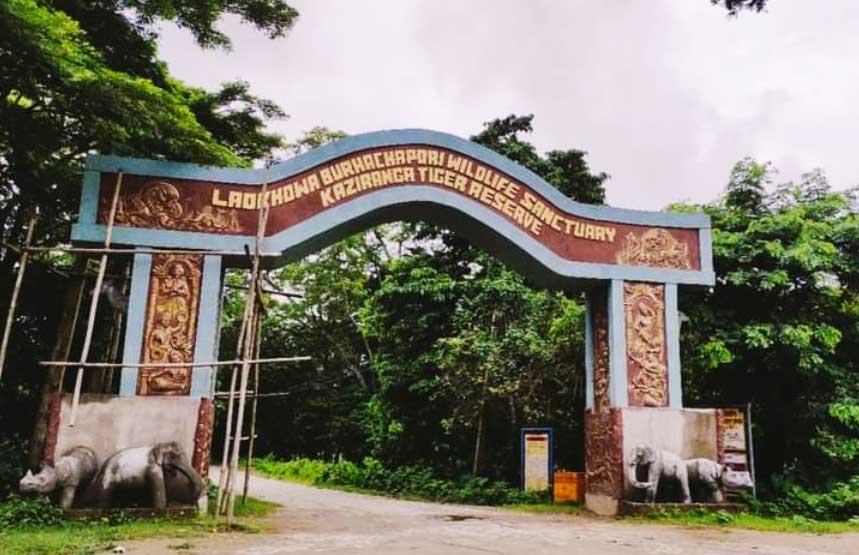 Both the forest reserves are located in the north-eastern Indian State of Assam.

The two centrally protected sanctuaries are naturally bordered by five PAs and NPs (National Parks).
For instance, towards the east is the Kaziranga National Park; on the west are the Pobitora Wildlife sanctuary and the Orang National Park.
On the northern side is the Pakke-Nameri National Parks while on the southern side are the equally rich reserve forest areas of Karbi Anglong to the south.

The Laokhowa Burhachapori characterized by grasslands, woodlands and numerous wetlands along with the Brahmaputra River Islands are home to numerous species of endangered mammals, reptiles and birds.

The Laokhowa Wildlife Sanctuary is located on the south bank of river Brahmaputra in the north-eastern Indian State of Assam.

The sanctuary constitutes a vital section of the Laokhowa-Burachapori eco-system.

Both the declared protected areas enjoy a rich treasure trove of varied species of reptiles, flora and fauna including highly endangered ones.
The sanctuary is home to more than 225 species of avians, besides the great Indian one horned rhinoceros, royal Bengal tigers, elephants, and the Asiatic water buffaloes.
Environmentalists have also recorded the presence of quite a number of species of various other animals in the sanctuary.
Mention may be made of the leopard cat, barking deer, wild pig, fishing cat, and civet.

Moreover, the Laokhowa Wildlife Sanctuary is also a breeding ground for more than 39 species of fishes, and 14 reptile species.

The alluvial grassland of Laokhowa-Burachapori wildlife sanctuaries also have among others the hog deer and barking deer as well as nocturnal species like the hare, slow loris, pangolins, and porcupine among others.

Above all, many endangered and rare species (with a number of them listed under the Schedule I species category within the Wildlife Protection Act-1972) are found in the two sanctuaries.

Among them are the civets, small cats, and otters, reptiles like the turtles, common and water monitors, and the pythons.

There are various species of turtles in the two sanctuaries. These are the Indian Roofed, Assam Roofed, Soft shelled, and the Peacock Softshelled Turtles. These two Protected Areas abound in butterflies like the Common Map, Birdwing, and the Crimson Rose.

The numerous perennial and natural wetlands serve as breeding grounds for quite a number of local fish species and also stork species like the Adjutant, Lesser Adjutant, White Stork, Black Stork, and the Black Necked Stork.
The Laokhowa-Burachapori wildlife sanctuaries are exotic to the Herons, Large Whistling Teal, numerous Raptors, grassland birds including the highly endangered Bengal Florican. Every winter, many species of migratory birds, including water fowls also visit the rich wetlands of both the ‘Protected Areas’.

Flocks of vultures do visit the sanctuaries to feast on the remains of deceased animals. One often comes across frolicking river dolphins on the surface of Brahmaputra waters. The river dolphins are highly endangered species.

The Brahmaputra River flows adjacent to the ‘Burhachapori Wildlife Sanctuary’.